Posted by horndeanguy on February 6, 2018
Posted in: Local Issues. 3 Comments

A short while ago the Boundary Commissions proposals to redraw the boundaries around the country were published and this proposed that the centre of Horndean would be absorbed by a new larger Rowlands Castle ward.

EHDC responded to the commission with an alternative proposal that retained the identity of Horndean in the village and stressed that the boundaries between Horndean and Rowlands Castle were stronger than the A3M. Thank you to those who responded too, the Boundary Commission noted that there were a lot of comments from residents.

So. The Boundary Commission have reviewed the comments from us, EHDC and the community and issued a revised proposal. This still combines Horndean and Rowlands Castle and now splits Kings ward between the current Catherington Lovedean ward and the proposed Rowlands Castle and Horndean ward. Their revised plan is just as illogical and makes little sense to any of us.

The red line plans below are the Boundary Commission’s revised proposals. 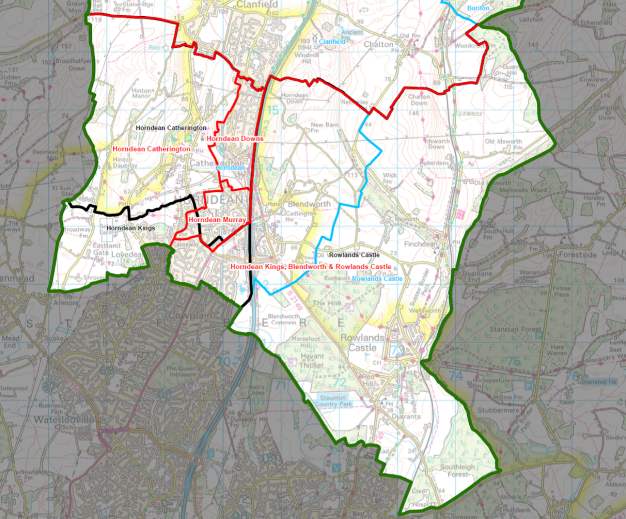 This would result in the following:

The Boundary Commission having made this revised proposal are giving a further 4 weeks until the 5th March for comments on the revised plans and their press release is below:

Extra chance to have say on East Hampshire council boundaries

The independent Local Government Boundary Commission for England has opened a new phase of public consultation in its review of East Hampshire District Council’s ward boundaries. The consultation focuses on new proposals for ward boundaries in Alton and Horndean.

New proposals (shown in red on map) include substantial changes to the Commission’s previous plans (in black).

Local people have until 5 March 2018 to have their say on the proposals before the Commission finalises its recommendations for new wards across the whole district.

Late last year, the Commission held a public consultation on proposals for new ward boundaries across East Hampshire. The Commission has listened to the views put to it during consultation and now proposes to make changes to the plans. Due to the significance of the proposed changes in Horndean, the Commission is opening an extra phase of consultation to see what local people think of the new recommendations.

Details of the recommendations, including maps of the proposals, are available on the Commission’s website www.lgbce.org.uk and on this link Here

My initial initial thoughts are the following:

The website gives you a chance to comment on the latest plans and you are also able to upload a map to show what you would like to see instead. It looks like the commission need to be sufficiently convinced whether or not there are strong links with Rowlands Castle. You can view and comment on the link in the press release above. The map below is the EHDC submission and if you wished to copy and send it on please feel free.

I will publish the EHDC response when it is issued!