Posted by horndeanguy on May 8, 2015
Posted in: Local Issues, Old Horndean Photos. 4 Comments 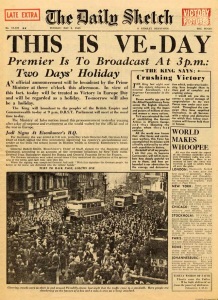 While today’s news is election focused, it is important to remember that today is also the 70th anniversary of VE day (Victory in Europe) and of course, locally we took part in some VE Day celebrations. Horndean of course had an extensive war history with loss of civillian life, bombings, spies, plane crashes and of course the sacrifice made by locals fighting the war who are now commemorated on the war memorial. If you have not read this account is on this link here. Click on the newspaper image to the right to open a larger file.

As well as supplying troops and having its own battle scars, Horndean saw large numbers of Allied troops come and go with several large buildings in the community requisitioned and used by battalions or other organisations. The D Day build up resulted in thousands of troops camping in the area and the constant threat of a telegram delivering terrible news or bombing was very real. Soldiers in the village centre or marching to church parade were a regular site (photo below)

During the war Germany also carried out an extensive propaganda attack on England and as well as radio broadcasts this included leaflets being dropped across inhabited areas. This one landed locally and tells of German U Boat successes and shipping losses as well as forecasting food shortages. The Battle of the Atlantic was very much underway and it must have been difficult and worrying knowing what to believe. (Click on the image to enlarge)

When the opportunity came to celebrate VE day, Horndean and the surrounding area took part in full and here is a first hand account from local resident Boy Stevenson:

Boy Stevenson (of Catherington based the business ‘Cowplain Turf’) recalls being a young lad of 9 when the war ended, and well remembers the VE day celebrations. His local one was held at Morley Crescent, Cowplain (photo above). There was enough money to buy food, or bunting, but not both!

“Grandad Etherington cut the grass on the green between the 4 air raid shelters with a scythe to make space for the party. Mrs Kill did all of the organising. The Ladies saved tins of fruit and jellies and a collection was made to buy the other things and families contributed weekly to the cost. A piano was carried out from Mrs Carters house at no 5 for music and everyone sang all afternoon I remember we sang ‘Sweet Violets’ and the whole crowd joined in with the chorus. The party started at lunch time and went on until early evening. It was mainly for the children.”

Boy Stevenson also remembers spending long nights in the shelters. “These were very cold and we regularly had raids. We were not allowed to collect shrapnel after raids as it was too hot but in the morning the we were allowed to look for it. I remember one night a piece of shrapnel narrowly missing my brother Donald who was outside watching the raid.” Photo below is of shrapnel from World War 2 collected near here including two pieces of a fire bomb.