Posted by horndeanguy on January 31, 2015
Posted in: Local Issues. Leave a comment

Over the last few years the Chief Constable and PCC have been reviewing how to restructure the Police Force to give a more cost effective structure. Each of the local councils will now have its own Chief Inspector and team. Horndean is currently served out of Havant and Waterlooville stations, but from the 1st April 2015 our local Neighbourhood and Policing Team will be based in Petersfield.

Chief Inspector Beth Pirie will lead the team as District Commander and will be supported by Inspector Karen McManus as our Neighbourhood and Prevention team leader. Sgt Phil Shore will take day to day responsibility for the 3 PC’s and 7 PCSO’s This team will cover Horndean, Rowlands Castle, Clanfield, Petersfield, East Meon, Buriton and Langrish.

They will be based from Petersfield Police Station but the use of PDA’s and other technology means that they will be out in the area most of the time.

The Response Team has between 7 and 14 officers depending on the day and time. they will still be based at Waterlooville but mobile units on patrol from all adjacent stations are able to respond to make the most of workload and location.

The Force Support Unit is also a stand alone team. If they knock on your door it is usually with a 20Kg sledge hammer and you are a very bad person.

The Roads Policing Unit, Dog unit, Strategic Operations Unit and Tactical Firearms Support Units are also unaffected by the changes and in addition to the Neighbourhood and Prevention Team.

The team are planning on continuing the monthly visits to Morrisons as this is a very accessible location to engage with the public, and 101 calls will still be handled in the same way. 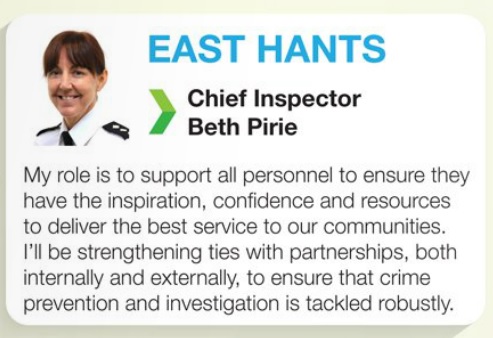