Posted by horndeanguy on November 8, 2014
Posted in: Local Issues. 13 Comments

Today’s threat to Horndean is the onslaught of developers coming over this hill (which we look like we will largely defend ourselves against), but in War Time Britain was Horndean just a sleepy rural collection of villages? After asking about, to my surprise it most definitely was not.

Dennis Longhurst, a current resident of Cowplain, was born in Horndean in 1932 and saw war time Horndean as a young boy and when old enough, a Cadet. In this remarkable article you are going to read about Bombings, Spies, Churchill, Doodlebug V1 Flying Bomb, Spitfires, Crashed German Planes, Blown Up Houses, POW’s, Lancaster Bombers, Tanks, Troops, Hidden Explosives, Montgomery, Eisenhower and so much more you will have to read it to believe it. 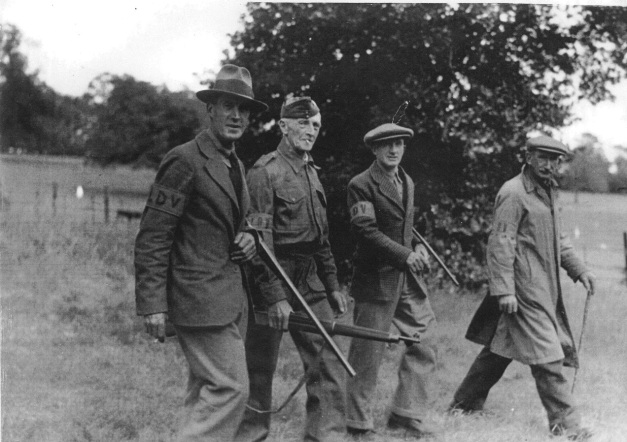 We would like very much to hear from anyone who can help with further photographs, names of the home guard men or further details of the War, especially from the villages of Horndean and Blendworth.

The detail for much of this article has been researched and written by Sara Schillemore and Guy Shepherd. We would both welcome comments, please click on the ‘comment’ link at the top of this post.

For a larger version of the map below click on this link here: Horndean War Map – Full Size PDF