Posted by horndeanguy on October 25, 2014
Posted in: Land East Of Horndean. 4 Comments

This application, if approved, would deliver Horndean’s housing need in a strategic development to 2028 that brings in some very welcome community facilities.

After two consultations WYG were ready to submit their plans but the site investigations identified local roosts of Bechstein’s Bats, an endangered species. This meant that specialists had to capture some of the bats and place transponders on them to track their movements and roosts. This has led to bat corridors being designed into the scheme. This has delayed their submission in the last months and if this were not the case EHDC may have been in a stronger position to defend one of the Lovedean sites.

The very fact that it has been registered is a material consideration for subsequent planning applications which gets stronger as the consultation period progresses.

Here is a copy of the masterplan: 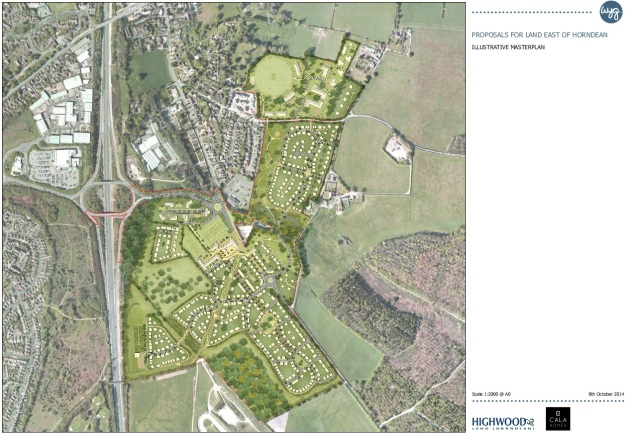 Timescales. Because the development needed an Environmental Screening Assessment the consultation period is 16 weeks so it should go to a planning committee towards the end of February 2015.

Interested parties have until the 22nd November to give their comments. These can be by post or email to the case officer who is Julia Mansi, EHDC’s most senior planning case officer. You can also give comments on the EHDC website and use the link to the Full Application details at the bottom of the page to do this. Cllr Dorothy Denston is the ward Councillor and will of course be very pleased to hear your views too.