Posted by horndeanguy on January 26, 2014
Posted in: Local Issues. Leave a comment

Hampshire County Council is looking to reduce costs and make sure the services that are delivered represent good value for money to us. Counts’s annual budget is a staggering £1,752 million. There are about 500,000 homes in Hampshire so this works out at around £3,500 per household in the county. When you consider that Southampton and Portsmouth look after their own roads and other services, the amount spent per household across East Hants is significantly higher.

Over the last three years HCC have made £100m of budget savings. This has been achieved in a number of ways, including all services reducing their budgets by 18%. They now need to make a further £93m of savings and all services have to find more budget reductions.

HCC realise that the Mobile Library Service is much loved by its customers but the use of the service is in decline and it is expensive to run.

• The changes in the way we live and use of technology have also contributed to the continued decline in use of the Mobile Library Service.

• The average cost per book issued from a mobile library is £2.52 compared to £1.05 from a library or Discovery Centre.

• Looking at an average across April and May 2013, just under 1,800 library cards (2% of cards) were used per month on mobile libraries compared to almost 89,000 per month across the Library Service as a whole.

The table below lists the stops HCC are proposing to cease at the end of 2014, some of which may be in your area.

In addition it is likely that the majority of stops remaining will be affected in some way as new routes and timetables will be required across the board. Details of these changes will not be available until autumn 2014.

HCC are just starting a three month consultation on these proposals and, if you have any comments, please can you send them to: 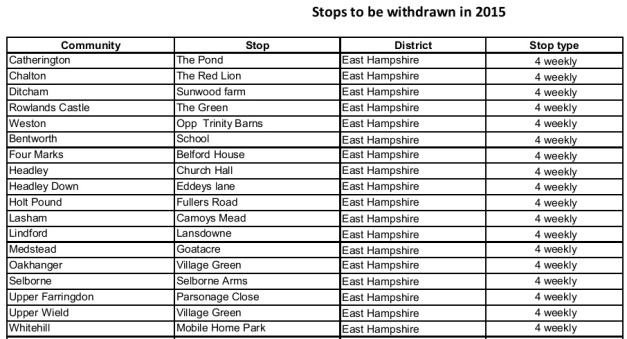